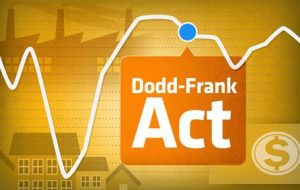 In 2007, The United States of America (and indeed the world) was being placed under enormous financial strain through the actions of financial institutions both foreign and domestic.

Global finances were being placed under enormous strain and it was realized that a new approach to policing the actions of financial institutions was long overdue.

This led them President Barack Obama to lead the charge towards the adoption of the ‘Dodd-Frank Wall Street Reform and Consumer Protection Act‘ which became law in mid-2010.

The Act served to consolidate the regulatory agencies that oversaw the financial services sector and also (among other things) set up new oversight mechanisms to police what was by then recognized as a ‘systemic risk’ to the United States economy.

The increased regulation was aimed in large part at making sure that what had been referred to as a ‘Wild West Situation’ around the widespread practice of derivatives trading was made much more transparent.

The consumer would also receive new protections and a new Consumer Protection Agency with widespread powers was established. The days of financial institutions promising returns that were simply not within the realms of sustainability were over.

In essence the Act had two tiers. One was to protect the U.S. economy from the practices of financial institutions that had, until then been a systemic risk to the stability of both the economy and the American dollar. The second was to protect the American consumer from predatory practices that had prior to the passing of the Act caused extreme financial hardship to many individuals and families that had chosen to believe in promises of returns that were completely unrealistic.

The passing of the Act was a clear signal to financial institutions that the era of taking advantage of consumers, as well as presenting a clear and present danger to the American economy would no longer be tolerated.