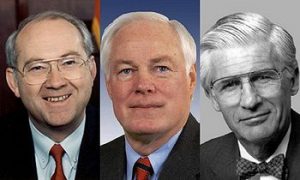 Toward the end of the last millennia, the banking trends throughout the industry had been in motion for several decades. Banks number of banks across the US had fallen considerably and the banks that remained had grown in size and financial power. There had been 14,000 banks in 1984 but the number dropped to 9,000 by 1999. This was part of an ongoing effort toward greater consolidation that was moving the financial services business in a new direction.

Furthermore, many of the financial services that had been separated during the second half of the century had suddenly become integrated and this included insurance, commercial and investment banking as well. By the start of the 80s, many of the commercial financial services had begun expanding into the underwriting securities as well. Some of them even began to sell insurance.

By 1999, financial integration was an established practice and Congress decided it was time to act. Bill Clinton signed the Gramm-Leach-Bliley Act at the end of 1999. The Act was named so in honor of the three congressmen that supported the act to approval. This had also been called the Financial Modernization Act would change how the financial sector operated and gave the Federal government special supervisory power.

The GLBA was intended to promote the various advantages of integration in the financial sector for investors and consumers. While still looking to safeguard the stability of the banking and financial system as a whole.

One of the biggest changes the Act introduced was the FHC or Financial Holding Company. This is essentially an umbrella organization that can manage its own subsidiaries in various financial activities. This was considered the happy medium where banks still have certain financial activities restricted but can opt to be a part of a larger organization that is involved in these activities.