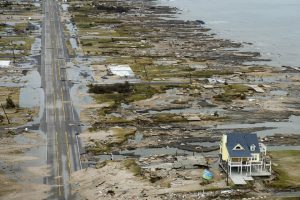 Hurricane Harvey in Houston is natural, organic alliteration. So is a terrible tragedy in Texas.

The devastation wrought by Harvey in and around the Houston area was breathtaking, and the full damage may still be assessed even higher than the currently reported death and property-damage totals. But to say tens of billions of dollars is not an outrageous estimate.

Insurance companies – and the government, which supplies flood insurance – have been inundated with property-insurance claims out of Texas because of Harvey, but also are seeing additional claims start to roll in from Florida following the damage wrought by Hurricane Irma over the past week.

In Texas, lawmakers might have handcuffed Texas residents before hurricane season, as a new law went into effect at the start of September that reformed insurance lawsuits in the state. Back in the spring, before the hurricane season started or there was any indication of a major hurricane hitting the Texas Gulf coast, the Texas Legislature passed a bill limiting the interest that insurance companies would owe if they were sued regarding slow or non-payment of property-insurance claims.

The bill reduced the interest payment by 44 percent, lowering the rate from 18 percent down to 10 percent. Just before the law went into effect, a Texas lawmaker asked the governor to bring the Legislature back into special session to address the law and delay its implementation in the wake of Harvey. The argument was that insurance companies would have less incentive to pay claims promptly knowing that their interest penalties would be far less than before.

A lawyer (of all people!) was trying to encourage people who suffered losses from Harvey to file an intent to file lawsuit claim before the September 1st deadline, though not nearly enough time had passed to expect reasonable claim payments in the wake of Harvey, as it had just passed through the area and many areas were still flooded as of the end of August.

Considered an aspect of tort reform, the goal of the bill was supposed to eliminate frivolous lawsuits against insurance companies which already suffer losses by fulfilling claims and then have to invest even more money to defend themselves against impatient policyholders. With lowering the interest cost to 10 percent, they argued, would be enough to keep some plaintiffs from filing a suit for delayed claim payments because the penalty for the insurance company wouldn’t be quite as painful.

Those who opposed the bill, or are pushing for a delay in implementation currently, are looking to give Harvey victims maximum flexibility to make sure they get their claims settled as quickly as possible, and they should have the freedom and opportunity to file lawsuits over excessive delays in settling claims. After all, time is money, as they say.

As he law is now in effect, it will be interesting to see how Harvey and the law affect the numbers of insurance-claim lawsuits in the wake of the storm.  Here is hoping that the help from other private citizens will ease the burden on insurance companies, and these companies will rise up and pay their claims quickly. The longer they take and the more legal fees they rack up, the higher all of our insurance premiums will rise to cover these devastating losses.